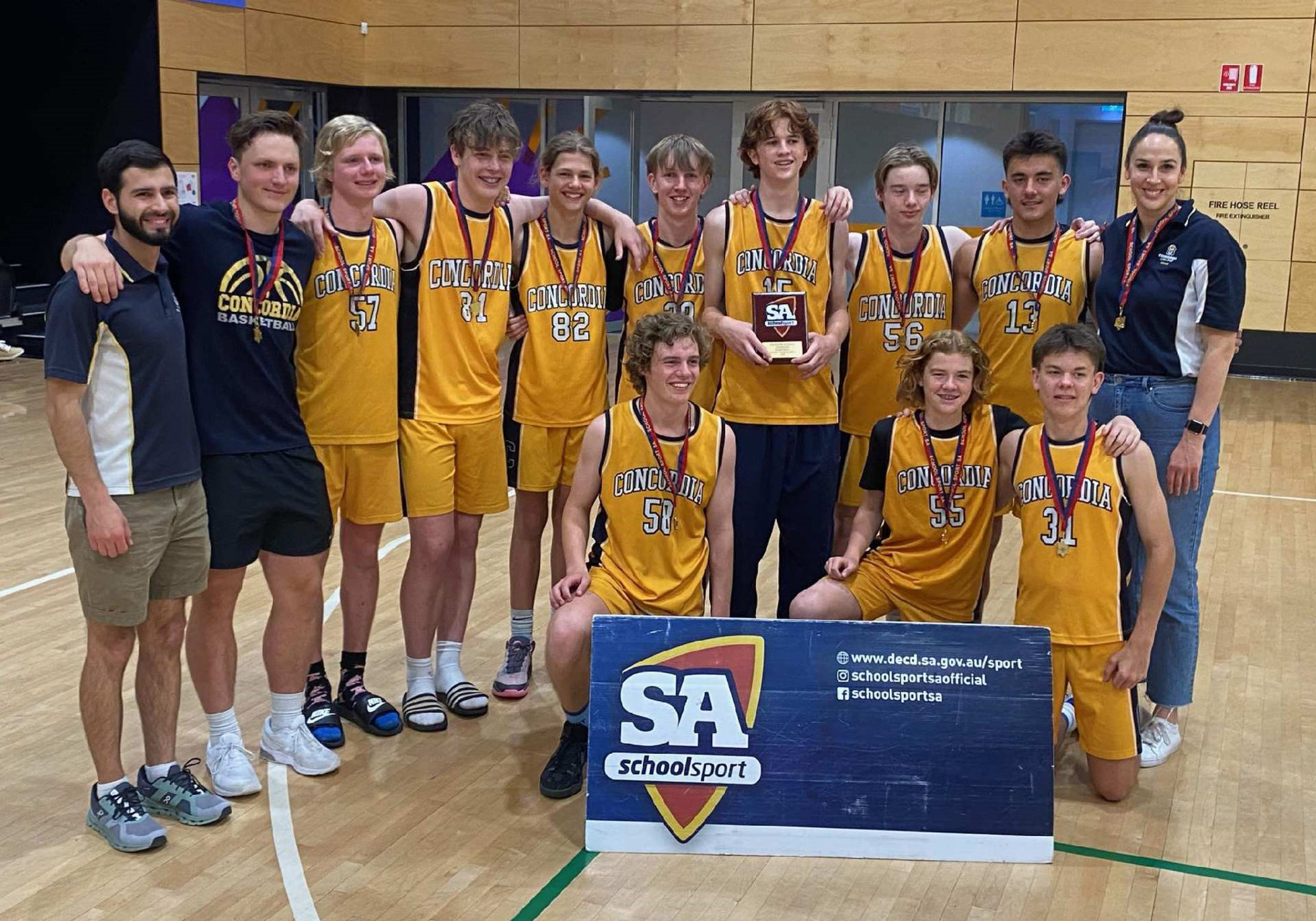 Concordia College cemented what has been an outstanding year for boys' basketball by winning the Year 10 State Championship on Thursday 17 November.

This State Championship victory was a reflection of the players' dedication to the program we have at Concordia. The championship also revealed the tremendous character and attitudes that the boys possess, as there were many stages throughout the tournament where they could have given up and quit; however, they fought through the difficult moments and were subsequently rewarded for this perseverance.

Notably, against Tenison Woods in our final "Group" game, we were down by six points with one minute left. Exceptional hustle and effort allowed us to get some timely steals to fight our way back into the game. Luke (8JHEA) closed the game by swishing a three-pointer in the final seconds to secure us the win. The next game (our first final game), was against a talented Modbury team. Modbury came out firing, making 6/7 threes in the first half alone! The boys managed to keep the margin within single digits and this allowed us the opportunity to get another come-from-behind victory as the scores were level with 30 seconds left. Paddy (10JPID) got open off a baseline play, and made the lay-up, plus the foul, to put us up by three points to close out the game - earning us a place in the Grand Final.

Our Grand Final match was again vs Tenison Woods. Tenison and Concordia have had many battles over the years (in all age groups). They are a program with talented country players who play incredibly hard, which always results in a tough battle for our boys. Getting us to this stage, every player on the team contributed throughout the prior games. We have a very young team (featuring three Year 8s), but that did not bother us as we came out ready to compete, no matter who we were playing and no matter the height or age difference. Paddy (10JPID) was a force all tournament long - solidifying himself as one of the best players in the state for his age group. This proved itself again in the grand final, as Paddy came out of the gates aggressively getting us off to an early five-point lead at the end of the first half. Luke (8JHEA) took over the second half - making shot after shot whilst displaying an exceptional defensive effort on Tenison Woods' star player all game long. Kurtis (10JPID) was also a vital member of the team all tournament and particularly in the Grand Final - providing us with some much-needed interior strength. The contributions from all members of the team in the Grand Final rewarded us with a narrow two-point victory versus Tenison Woods! Luke (8JHEA) was awarded the Grand Final MVP award.

I am very excited to see what this group of talented and high-character individuals accomplish next! The future is bright for Concordia Basketball!

Congratulations to all girls who represented Concordia in the Senior A and Senior B Volleyball grand finals.

The Senior A match was a fantastic game with both teams playing high-level volleyball and both having the opportunity to win the match. Despite a brilliant effort, Concordia were defeated 1-2 in the end.

In the Senior B game, Concordia defeated Pembroke 2-0 with some outstanding play by all. It was a good game from the opposition, but in the end the Concordia were too strong.